Everybody knows that you can’t have an allotment without a compost bin. An allotment without one is just a piece of land. It’s one of the most important items we need to make or buy for our site, at least that’s what I told Rob in the arguments I presented in favour of us getting a bin immediately. It’ll be chockablock by Wednesday, that’s how desperately we needed one, and because he can’t resist my persistent nagging: 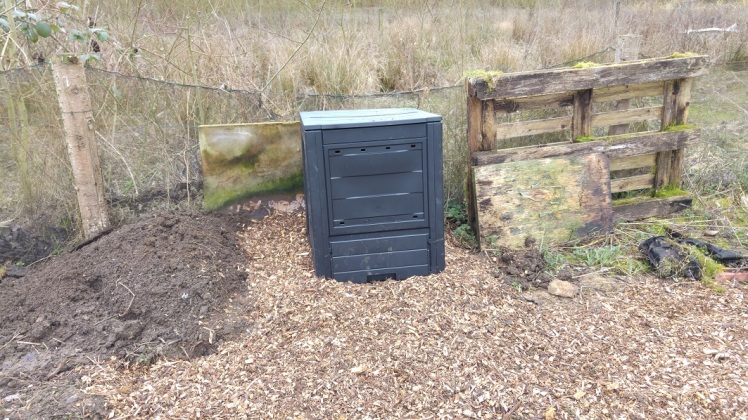 Once constructed we excitedly looked around the site for items to compost and, well…  It turns out that we didn’t have anything. Everything that isn’t on the burn pile (thistle, dock, nettle rhizomes, bramble) is being reused elsewhere. So in a desperate bid to christen the compost bin I put some of the old compost from the derelict pile the previous tenants had left in it. Sorted. That was a week ago and we haven’t opened the bin since. 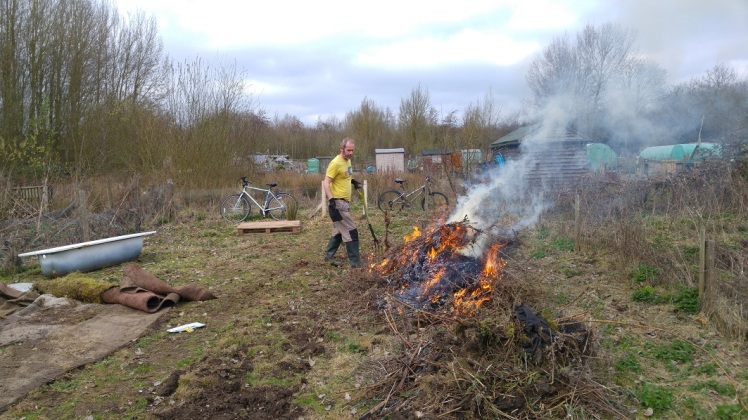 To distract Rob from teasing me about the unnecessary-necessary compost bin I made him start work on our second vegetable bed. This one will be raised, unlike our first.

We’re moving earth from the pathway as we’re digging it and placing it in the new bed to give it some depth. We’re also keeping the turf and piling it in the corner of the site. Hopefully it’ll eventually break down into loam. I’ve placed pallets L gave us in the near vicinity to get an idea as to where to construct a bin for manure, but we’re still to work out exact location and size.

L, who’s “in the know” has informed us that manure is due to be delivered soon. I like to imagine she’s connected to the other plot holders via rhizomes and this is how the information is filtering through to her, but I suspect she’s actually on the association mailing list and we’re not. Either way, she’s a goldmine of information. I happened to mention that I was going to buy some Russian comfrey the other day but she advised against it and pointed me in the direction of another plot. 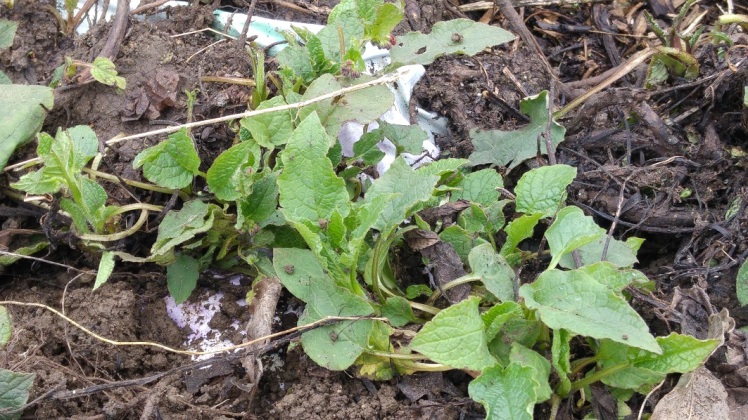 I’m not sure how long the plants had been there but they were beginning to look a little worse for wear so I offered three of them sanctuary. That brings me to the very first plantings in our allotment:

I’m sure they’ll perk up in a few days. If not they’ll also be our very first crop failure.

Whilst in the spirit of planting I also relocated the reeds that we’d previously dug up but had yet to replant into their new position behind the well.

It made a nice change from digging the path. The job seems endless.

The gateposts are in sight now though so we’re nearly there. Progression has been slowed by the number of red fire ants we’re finding. On one occasion I didn’t notice their nest until it was too late. I experienced a distinct sense of horror when I felt a tickle on my arms and looked down to see the ants swarming up my bare arms and into my gloves. Let’s just say that I pulled out a few moves akin to Beyoncé’s Single Ladies but with a lot less finesse and a lot more flailing as I attempted to remove my gloves.

And so we have survived (just, damn you fire ants!) our second week of allotment ownership and progress is being made. The only real casualty has been my trowel that was no match for clay, and my gardening gloves that I refuse to wear in case there’s still ants lurking in them. I’ll get over it eventually, or trick Rob into wearing them first…

So much cuteness. So much chaos. 😻😻
Introducing Pyewacket and Grimalkin, the newest additions to our boat family. 😻😻
Galley update: just need to tap in the pins and fill the holes, but the oak trim has saved me (phew!). Rob's so much in the DIY zone that he's now tackling the skirting he started eight years ago.
Galley update: Rob is doing actual work whilst I pretend I'm a Top Gun landing signals officer guiding ducks in to land on the USS Gabble Ratchet. Important stuff...
Galley update: made more of a mess, broke another sander, danced to Arctic Monkeys, denied all knowledge of "The Tile Incident"... 😂
Somebody, who cannot be named for legal reasons, did indeed order the wrong sized tiles, but in her defense, she is numerically dyslexic... 🙉